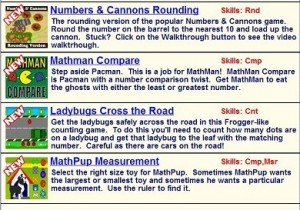 The holidays are upon us and that puts conscientious parents in mind of a couple of issues.  First, parents wonder what to do with the kids over the holiday break to keep their skills primed so that they don’t get too rusty.  And second, they are pondering over what type of advantage they can give their children as they head into classes for the second semester.  To help with both of these points, Mathnook has added a series of cool math games to their online collection to help with key math skills which will aid them in their schoolwork.

The first key concept is rounding.  This is an important skill for young students to master as it helps with estimation which will be of supreme importance when working on other skills later included complex multiplication and division as well as money management and budgeting skills.  Numbers and Cannons Rounding is a new version of a popular Mathnook game which has learners round the number on the barrel of the cannon to the nearest ten so that they can load it up and set it off.

Another popular early math concept that students will need to master in order to move on in their studies is comparison.  Putting two numbers side by side and deciding which is the larger number and which is smaller is a common task.  When I learned this particular skill, even I noticed that the greater than symbol (>) and lesser than symbol (<) resembled a certain ghost-munching video game hero.  So the folks at Mathnook have introduced MathMan, a mathematic twist on PacMan which features numbered ghosts and the hungry MathMan who has to chomp the larger number.

Another new game with a distinctively retro feel to it is Ladybugs Cross the Road.  This game combines the play of the classic game Frogger with the basic math skill of counting.  Players have to count the dots on the ladybug to determine which corresponding leaf they should move to so that they can navigate the field.  This is a particularly excellent game for the very young who are just honing their simple number skills.

The final skill which has been added to the Mathnook arsenal is measurement.  MathPup Measurement is a game which features MathPup, the math dog, who wants the smallest toy or the largest which the player has to accurately select.  Other times, a specific toy has to be selected and the player has to measure the toys.  Measurements and how to take them are not just used in mathematics.  Children who master this skill early on will have a greater ease when working later in science classes such as Biology and Physics.

This holiday, rather than sitting around the house watching TV, have your child log in some time on Mathnook and check out the new, cool online games.  You will help keep their math abilities fresh and ready for the coming semester.